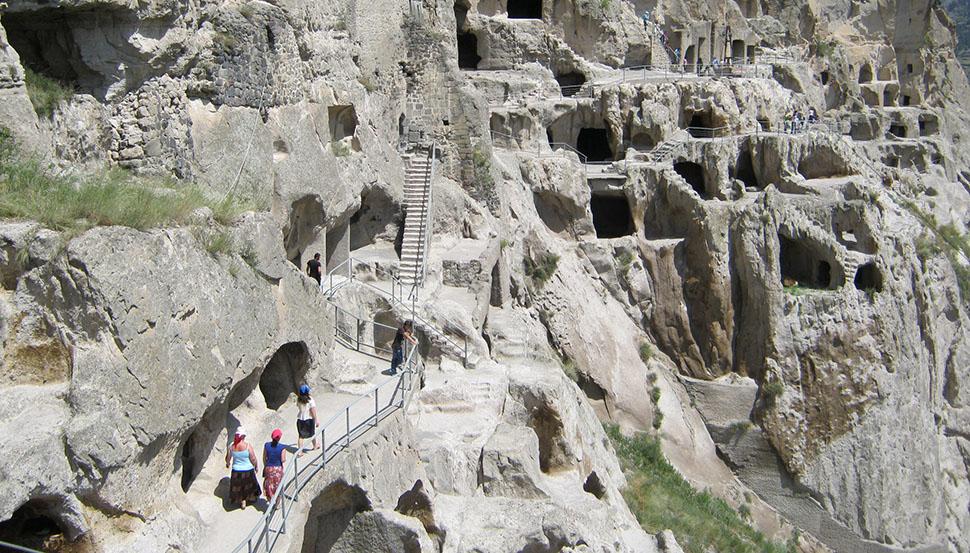 Vardzia (Georgian: ვარძია) is a cave monastery site in southern Georgia, excavated from the slopes of the Erusheti Mountain on the left bank of the Mtkvari River, thirty kilometres from Aspindza. The main period of construction was the second half of the twelfth century. The caves stretch along the cliff for some five hundred metres and in up to nineteen tiers. The Church of the Dormition, dating to the 1180s during the golden age of Tamar and Rustaveli, has an important series of wall paintings. The site was largely abandoned after the Ottoman takeover in the sixteenth century. Now part of a state heritage reserve, the extended area of Vardzia-Khertvisi has been submitted for future inscription on the UNESCO World Heritage List.

Soviet-era excavations have shown that the area of Vardzia was inhabited during the Bronze Age and indicated the reach of Trialeti culture. Cave settlements such as Uplistsikhe are known along the Mtkvari River from at least the fifth century BC, while rock cut architecture in the context of Georgian Christianity is known from Zedazeni and Garedzhi from the sixth century AD, and more locally from Vanis Kvabebi, Cholta and Margastani from the eighth century. Four distinct building phases have been identified at Vardzia: the first during the reign of Giorgi III (1156-1184), when the site was laid out and the first cave dwellings excavated; the second between his death and the marriage of his successor Tamar in 1186, when the Church of the Dormition was carved out and decorated; the third from that date until the Battle of Basian c.1203, during which time many more dwellings as well as the defences, water supply, and irrigation network were constructed; while the fourth was a period of partial rebuilding after heavy damage in the earthquake of 1283.

A number of documentary sources supplement the knowledge derived from the site's physical fabric. The collection of chronicles known as the History of Georgia refers to Tamar erecting a church to house the icon of the Virgin of Vardzia after receiving divine help in her campaigns, before transferring the monastery from Upper or Zeda Vardzia. Tamar is said to have departed from Vardzia during her campaign against the Muslims, and her ensuing victory at Basian is celebrated in the Hymns in Honour of the Virgin of Vardzia byIoane Shavteli. The History of Georgia also relates how Vardzia escaped the Mongol invaders in the 1290s. The Persian Safavidchronicler Hasan Bey Rumlu describes Vardzia as a "wonder", "impregnable as the wall of Alexander the Great", before recounting its sack by the Persians under Shah Tahmasp I in 1551; a near-contemporary note in the Vardzia Gospel tells of its repatriation from a Persian bazaar. After the arrival of the Ottomans in 1578, the monks departed and the site was abandoned